I’m often involved in discussions about watermarking photos. Specifically, that I should be watermarking my photos. To me, photographers you’ve got a choice, and the default shouldn’t be the watermark.

Legally, one doesn’t need to watermark

People seem to (wrongly) think that a watermark is a sign that the work is copyrighted. Legally, copyright is implied and automatic, so that’s just a common-held misbelief. People also seem to think that work won’t be pinched IF it’s watermarked, or at least they will have a visual reminder that it’s owned by someone. A little “hey, don’t pinch me please” reminder… END_OF_DOCUMENT_TOKEN_TO_BE_REPLACED

Sorting out copyright is complex. To say the least. How you approach it, well… There are many strategies, from send an invoice to a legal threat, but you never know how they will respond. And you have to be prepared to follow up, which could be really costly, too. END_OF_DOCUMENT_TOKEN_TO_BE_REPLACED

Friday week ago – 16th October – I got surprise. I was tagged in a Facebook post with a quick snap of my photo on the Channel 7 Melbourne News broadcast.

I received a phone call today, 6 hours after sharing this story via social media. Simon, from Channel 7 Melbourne, apologised for this mistake and advised me this photo was submitted by someone else. When I pressed for who, Simon didn’t know as there was too much data to sort through. Simon indicated that they would continue to look through the data, and I’m now waiting to find out who submitted this photo. After asking for an ETA, Simon advised me he’d ‘try call tomorrow’ (Friday).

To be honest, we’re talking about 8 nights of photos to go back. This would have been 1 night back had they responded to my initial request, but now it’s 8. The fact they have too much data to go through feels unusual, so I am eagerly waiting Simon’s response.

I had no idea they were using it; they never asked, and they didn’t even let me know. The only reason I knew was because a friend of mine happened to catch it and let me know.

When it comes to my photos, they sometimes ‘do the rounds’ and get picked up, both with and without consent. I advised Channel 7 the Monday after the broadcast. They emailed me that Friday with a “we’ll be in touch”. 10 days after letting them know, I’ve had enough of trying to do this quietly.

On Friday morning, October 16, I had an early start to the day. I was meeting up with some Instagram buddies to head out for a sunrise shoot and meet face-to-face. That morning, I put it up on Twitter, Instagram & Facebook. Here’s the tweet, with a notable favourite…

Turns my Tweet got a favourite that day from Channel 7 News Melbourne Meteorologist Jane Bunn. Then that night, it’s on air. 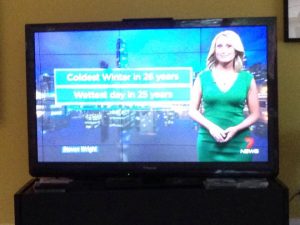 On the following Monday (Oct 19th) morning, I reached out to Channel 7 via a direct Facebook message and asked what happened. From what I can tell, there’s a few potential scenarios:

Just to be clear…

Channel 7 did put my name on the photo during broadcast. Crediting, though, is not permission. That’s akin to me crediting Disney when sharing Mickey Mouse material; Disney wound’t stand for it because I am breaching their copyright. And that’s what has happened here.

Does this even matter?

Some would say not, and that I should appreciate the exposure (yes, I get that a fair bit!). In my opinion, and when you’re in my position, it’s my right to care as it’s my photo used without my permission. That’s what really pisses me off; they should have asked! Making this type of creation isn’t easy and it’s a process that has taken years to refine. I mean, for them to just ‘take it’ isn’t right.

Not only that – how do they actually source any of their photos? I mean, now I wonder if anyone actually sends them in, of if they just pluck things away at their choosing!

All that said, photography isn’t my business. I haven’t made this a professional pursuit, because I value my motivations. I do this stuff for the love of it, and to be honest, the feedback I get is really humbling and encouraging. In the past, I’ve used my photography for charity fundraising. I love giving prints as gifts for friends and family. And I frequently let other artists and students use my work. But it’s not about money.

I’m yet to get any response of substance. I’m really disappointed the Channel 7 News team haven’t reached out to me with any explanation. Brett from the Channel 7 social team has been really helpful, and checked in to follow up, but he’s done what he can.

I want Channel 7 to put something on the table as an apology and acceptance they have done the wrong thing. Like I said, this isn’t my business, and I didn’t create the situation. But I want them to fix it.

And if you didn’t know… What should have happened?

In 2014 I managed to get a photo of Russian space junk burning through the sky in dramatic fashion. It was pretty exciting to be honest, and I was approach from ABC Australia, FOX, CNN, and many more requesting permission to use it. Check out CCN and the video: http://edition.cnn.com/2014/07/11/world/asia/australia-fireball-soyuz/. To the surprise of some, I was more than happy for people to use it. Some thought I should have tried to cash in on the photo, but that’s just not me. I was okay for people to use it on request, and I didn’t say no once. In fact, the real highlight was Scienceworks using it for their Planetarium – I honestly find it awesome that I’ve got something that helps get people excited about space and science.

The key to this space junk example is I was asked for permission. The reason people ask for permission is mostly legal; a major broadcaster should understand copyright, and the nature of copyright is such that it’s implied. Whoever creates it, owns it. That’s it.

As for the actual photo, here it is…